Are we headed for a recession? There have been several economic indicators the past few weeks that raise the specter of a recession happening in the near future. One of these indicators happened today, December 3, 2018,: A part of the US Treasury interest rate yield curve inverted for the first time in more than a decade (more on exactly what this is later). What that means in terms of economic forecasting and probability of a recession is more important. Historically almost every time the treasury yield curve has ever inverted a recession has followed soon thereafter.

How might this affect homeowners, home buyers, and real estate investors in the real estate and mortgage world? Typically, as far as interest rates go, recessions bring lower interest rates. In our current economic environment, we probably won’t see interest rates going down much if at all through the first half of 2019, but we may seem the pace of interest rate increases slowing. Some of the Federal Reserve members have indicated this week as much.

Higher interest rates translate into less buying power for homebuyers and higher interest expenses for borrowers. For homeowners we are already seeing a slowing of home value appreciation and even some home value contraction in some key leading indicator real estate markets, for example in California.

Oh by the way, an inverted yield curve means that short term interest rates are higher than longer term interest rates. Bloomberg News reported today: “The spread between 3- and 5-year yields fell to negative 1.4 basis points Monday, dropping below zero for the first time since 2007, and the 2- to 5-year gap soon followed. Curve flattening over the past two years has signaled investors’ concern that rising rates against a backdrop of slowing global growth could harm the U.S. economy… Inversion — where yields at the short end rise above those at the long end — has been a reliable indicator of recessions… Some analysts cautioned against reading too much into Monday’s inversion.” 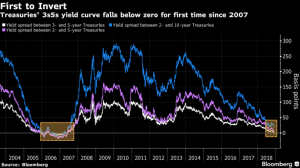 Keep Calm and Carry On: Words of Wisdom for 2019’s Low Interest Rates

“Make hay while the sun shines!” If you’re considering buying a home, you might be…

In an Uncertain World, It Pays To Think Like a Gambler

What’s up is up, what’s down is down. What’s true is undoubtedly true and what’s…